In 2016 my very dear friend and long distance riding companion, Pam Brooks, died leaving a huge gap in my life and I am sure, many others. We had planned to ride the Sandstone Way that year but Pam’s illness was so rapid we never achieved this. Following her loss I did intend to ride the Sandstone Way in her memory and raise money for MS which her daughter suffered from. Unfortunately the ups and downs of life events over the past two years have prevented me meeting this commitment so in the summer of this year I decided that I would organise a ride from Holy Island to Melrose in Pam’s memory and my friends and I would try and get sponsorship for MS. The first time Pam and I rode this route we did this together and had a lovely time. So it seemed a fitting tribute to do it again in her memory.

My field mates, Adi Kay, Fiona Colvin and Chloe Howden agreed to do the ride with me. Adi is now quite an experienced hand at long distance but it was a completely new experience for Chloe and Fiona. The four highland ponies we took were Lass, Albus, Fiadh and Buster who were all field mates too.

With support from friends and family we were able to travel to Holy Island on the Saturday morning and leave the island not long after 11am heading over the sands following the markers for St Cuthbert’s Way walkers. The tide was heading out but there were still a few water courses to negotiate. Fortunately the sands were firm and caused no problems. We noticed a very loud noise and at first I thought it was the wind. The ponies were a little unnerved by the sound and it was Adi who eventually realised that it was a colony of seals on the sandbank that were making the noise. We managed the sands with no mishaps however the next obstacle was passing a music festival on the shores. There was a large amount of people milling about and we had to pass between the festival field and the helicopter field. The helicopter seemed to be doing a 15 minute up and down to show people the view. Albus was less than impressed by the helicopter landing and taking off near to him. The rest of the ride for that day proved to be uneventful.

We crossed the A1 without incident and travelled on a country rode through Fenwick joining the Sandstone Way (seemed fitting that we should ride for a short distance on this route). We crossed fields and rode to St Cuthbert’s cave where we had a wee lunch break. Riding on we eventually came on a new wooden full sized statue of St Cuthbert and made sure we had some pictures taken there. An hour or so further on we reached East Horton and our B&B for the night. Once the ponies were settled and we were showered and changed our hostess kindly drove us into Wooler where we had booked a table at the Italian restaurant. I can highly recommend a visit to this restaurant. A good couple of hours later, and after one or two mojitos, we left in a taxi for the B&B.

This day was the longest of the 4 days and involved riding into Wooler, over the Northumberland National Park and down past Yetholm. Riding to and through Wooler proved uneventful and our first stop for a rest was on Wooler Common. The weather had been good the day before but was even better on this day. That was a relief as up on the hills is very open and challenging. We were lucky with the fields that we had to go through that there were no riotous cattle and everything went smoothly. My bones certainly ached by the time we joined the Pennine Way for our last leg of the day. It was a long hard ride and we had set off later than we would have liked which meant that we were late arriving at our next B&B. Our hostess was rather anxious and phoned just as we were arriving. Adi and Fiona had a lift home but Chloe and I were staying. It was a rush job to get ponies settled and get to the local Hostelry before they stopped serving food. However we managed and had a lovely meal followed by ice creams.

Chloe and I were happy to tip into bed and were soon sleeping. Unfortunately not for too long as I was wakened up in the early hours to the sound of the clip clop of horse hooves outside the bedroom window. Initially I thought it was our horses but it turned out to be the neighbours horses which were all rounded up safely but not before Chloe and I had lost two or three hours sleep.

Well we rose to pouring rain and a good wind which remained in situ for the rest of the day. Adi and Fiona arrived and we set off up the Wide Open Hill, the highest point of the ride. My daughter maintains that this hill is rock climbing with ponies!! We all got used to the weather but we were all starting to feel tired and the ponies too, so one or two of us were crankie?? My feet were soaking wet all day and I was cross that I hadn’t prepared well for this by carrying spare socks. I had sent my overnight clothes home with Fiona and Adi’s lift to save the pony having to carry extra weight. They had enough to do carrying me! Sadly we didn’t get much of a view from the hill as the conditions were too bad. We carried on down through Morebattle then on to Cessford over the moor. Another long day through Jedburgh and over to Judith King’s near Lanton where the ponies had lovely stables with big haynets. They all looked very relieved to get in out of the rain and so were we. We were picked up and all managed to get home for the night.

All four of us arrived back at the stables ready for the last day. The weather had improved dramatically but I am not sure my mood had. We were all tired but knew we had to face the challenge we had agreed on. Although a shorter day it was still long enough especially as we had one or two problems to solve. The first proved to be horses in the field that we needed to cross so we decided rather than cause mayhem we would try and go another route. We were very fortunate that a land owner supported us to cross through his fields and over the very high ford into Ancrum. Adi went the next day with a Selkirk Bannock to thank the person who assisted us in identifying the new route. Once through Ancrum Park we had a long haul on a country road before we picked up the Drove Roads into Melrose. On the Drove Roads we discovered our way completely blocked by a huge tree but clever Adi had noticed a way through a field a bit further back. Thank goodness J. By this time the ponies were exhibiting crabbitness as well as the riders and some were less than well behaved trying to run for home without us! I mean the ponies but probably one or two humans felt the same way. I think ponies and riders were all relieved to come over the crest of the Eildon Hills and spot the field below. A steep walk down into Melrose and we were back at the ponies home. 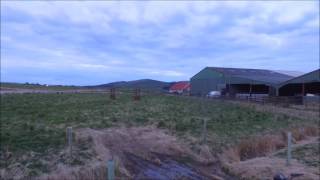 A wee taster of what awaits at SoS TREC's first competition

Map and Compass training in snow